Turquoise is found in many parts of the world, including Iran, Tibet, China, Egypt and southwest United States. Although the purity and color of the products of most turquoise mines are different, but most of the stones are similar at least in appearance.

Turquoise is found in different parts of Iran, including Neishabour, Baghu (Damghan), Allahabad and Yakhabad (Kashmar), Midouk and Chah Firoozeh (Babak city) and is is used in different ways depending on its quality and economic value. Neishabour Turquoise Mine is the oldest and most important mine in the country and has a special reputation in the world. Neyshabur has long been an important city along the Silk Road, connecting the Iranian plateau with Central Asia on the one hand and the Anatolian Plateau and the Mediterranean coast with China on the other. These mines are located next to an old route that used to be the passage of trade caravans in ancient times.

In Egypt, there are two mines in the Sinai Peninsula which used to be called the “Turquoise Country”. These are among the oldest known mines in the world. These mines are now of little economic value and are mined primarily by the natives using traditional methods. The turquoise stone of this region is greener than its Iranian type. Today, many turquoises sold in Iran belong to the city of Babak in Kerman, from which very rich sources have been recently discovered.

The Chinese were familiar with this gem more than three thousand years ago. And they produced it to a limited extent and their artists used it to highlight their works. Marco Polo also noted in his report that this stone was found in China’s Xi Chuan province. There are also mines in the east and west of Tibet. 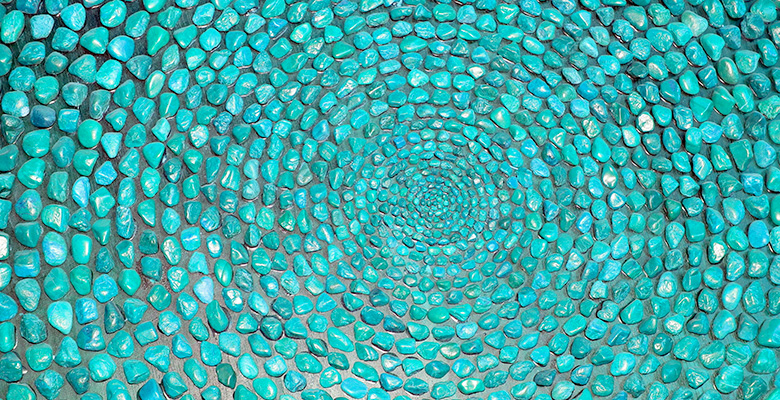 Turquoise Mines in the West

The southwestern United States is rich in turquoise, and regions such as

Arizona, California, Colorado, New Mexico, and Nevada are known to be major centers of production. Arizona is currently the largest producer of this stone in the country. Nevada is another US state that, with 120 mines, supplies a large portion of the turquoise used in the jewelry industry. The finest type in the United States comes from the New Mexico mine Los Krillos, and before the Spanish conquerors entered the new continent, the ore was widely extracted by the natives.