This “ashing” or “warming” process is to make the dark and light colors of Yemeni agate more distinct. It is said that after this, the stones are engraved with basic tools and the name of the extraction site mountain is engraved on the agate shelf and then cooled with water. Al-Hamdani writes in his book entitled “Ancient Jewels” that:Raw Yemeni agates are placed in urn-like containers for a few days and then sealed with plaster and buried in hot ash or charcoal for 2 weeks to 1 month. At this stage, the agates are about 2 inches thick under the ashes and the charcoal is very finely cut and red.

“At first the agates appear dark, and their red and yellow colors appear after the cooking process.” 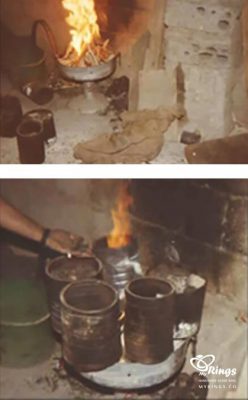 Interestingly, agate miners polish the rough edges and rub them against granite at the end of the process for a better look, even though the scratches are quite visible. Old Yemeni agate lathes who gave polished with a wheelbarrow are well acquainted with this type of rough.

At this stage, the rough stone is given its initial shape and is cleaned and refined. Polishing stones are used for this purpose and in the local market it is known as “al-majrabah” which is an ordinary rough stone (for initial polishing it’s often a stone from the same mountain or with granite) and “Al-Tabshura” which is a soft stone (the soft and final stage of polishing).

The polishing stone material is attached to a short stick with Arabic gum so that the lathe can easily polish it on the stones (grinding operation). Yemeni agate experts confirm that this traditional method yields a higher quality than modern methods that use machines.

It starts with placing the raw Agate in a ceramic or metal container called an “alberma” and isolating the container with clay paste. Then the dish is placed in the oven at low temperature. The stone’s debris is discarded to give it its initial shape, which is done using a small hammer and the stones are usually shaped according to market demand. Unwanted pieces are discarded to get the master’s desired shape. The stones are then polished and refined in the same way as in other places.