Turquoise is mainly found in volcanic rocks in which intrusive or semi-deep masses have penetrated. The probable age of deposition and formation of Iranian turquoise reserves is estimated in Upper Eocene to Lower Oligocene. The most important turquoise mines in Iran include Neishabour turquoise deposit, Baghoo turquoise deposit (Damghan), Allahabad and Yakhabad (Kashmar) Abdullah Gio turquoise index, Aliabad Taft turquoise index and Chah Firoozeh copper deposits (Babak city) and Miduk. Also, traces of turquoise have been identified in Ningan, rough mountains of Sarhangi mountain, Ashgabat Tabas, Qaleh Vaziri Basiran, Chah Ebrahim Zahra, Sarcheshmeh copper deposit, Jabal Barez and Saveh mountains. In Iran, in addition to Neishabour Turquoise Mine, which is the most important turquoise mine in the country and is world famous for its excellent quality, there are other turquoise mines, but due to the small amount and lack of quality, their turquoise reserves have been ignored such as: Tabas, Kashmar and Quchan turquoise mines whish their products are not mainly bleu turquoise, but green and have little value and are used to make objects, decorative utensils and animal sculptures. 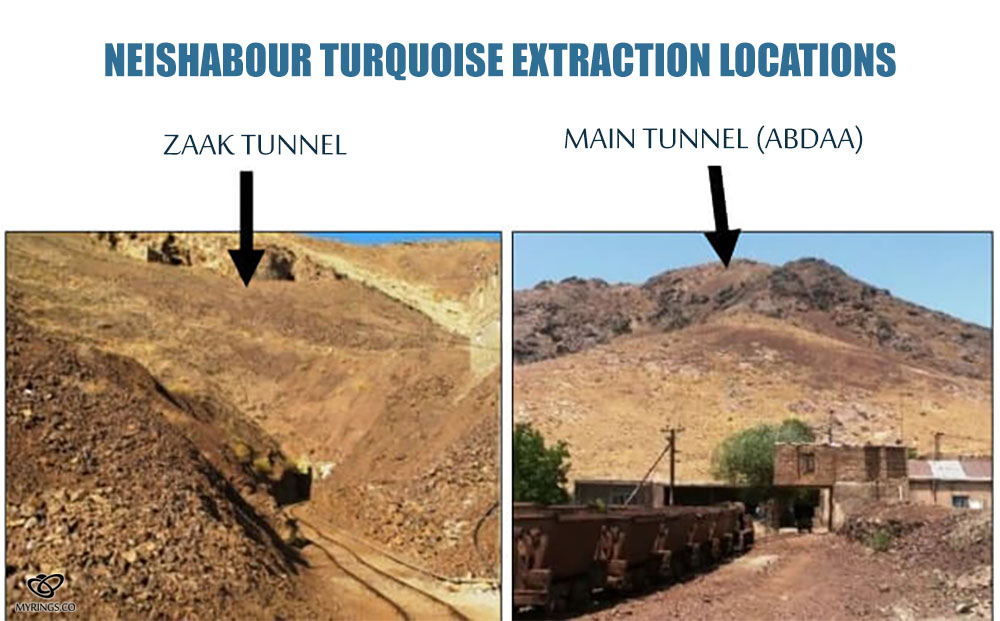 The best type of turquoise in terms of quality, color and value is in Neishabour deposit, which is one of the oldest mines in the world and has been mined since 4000 years ago. Today its remained exploitation mines in the form of irregular caves and cavities throughout the turquoise region are evident. Neishabour turquoise mines are located 55 km northwest of Neishabour city, 35 km northwest of Firoozeh city and 4 km northwest of the mining village, which includes the ‘Oliya (upper) mine and the Suflaa (lower) mine and It is located in the heights called Ma’dan Mountain, Ra’iss Mountain and Abdul Karimi Mountain.
This mine is located in the structural zone of Eastern Alborz and below the Binalood zone in terms of structural geological divisions. In fact, the mine is located on the southern slopes of the Binalood Heights and in the volcanic belt south of Quchan. 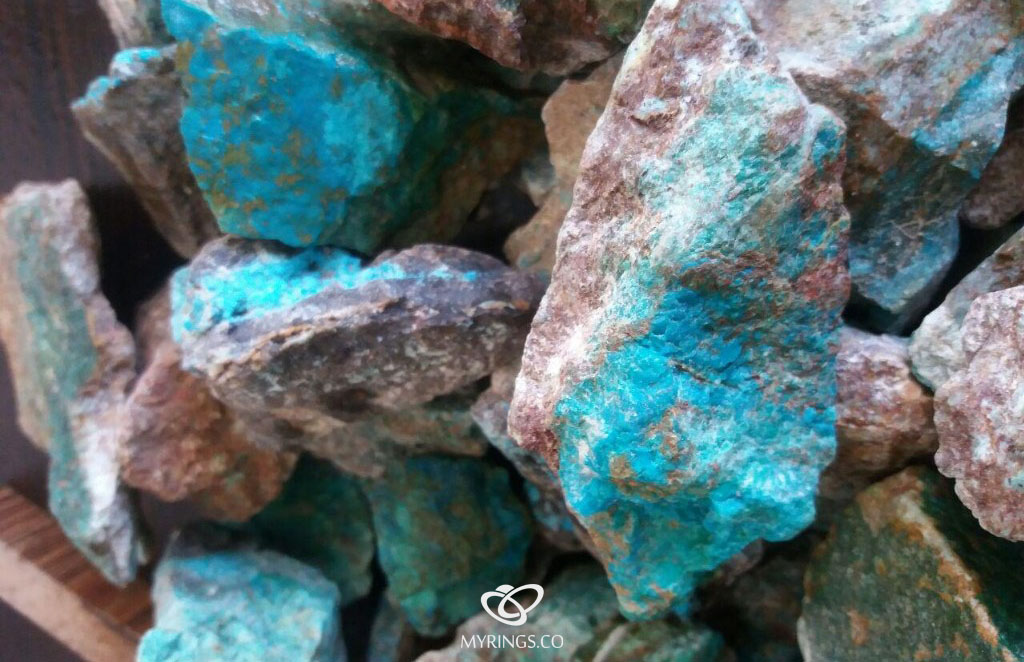 Firoozeh Midouk mine is located in Kerman province, 42 km northeast of Babak city and 132 km northwest of Sarcheshmeh copper mine. The host rock of this deposit is Eocene volcanic and detrital rocks that have been cut by several intrusive masses of granodiorite. In Shahrbabak, very beautiful and diverse examples of turquoise can be found. Turquoise is mainly found in streaks and in some areas as a grain in the rock. The thickness of these veins is very small in most areas and is in the range of a few millimeters to one centimetre and in the form of horizontal veins and in some parts vertically in the host rock.
In addition to turquoise, other minerals such as malachite, azurite, chrysocla and calcanite are also found in these areas. The turquoise in this deposit is mainly seen in blue and green colors. Blue turquoise belongs to the oxide zone and green varieties belong to the transition zone. Turquoise of Babak city, unlike Neishabour, is mainly formed in the host rock of Andesitic trachea.
The turquoise formation process of Midook mine can be presented as follows: 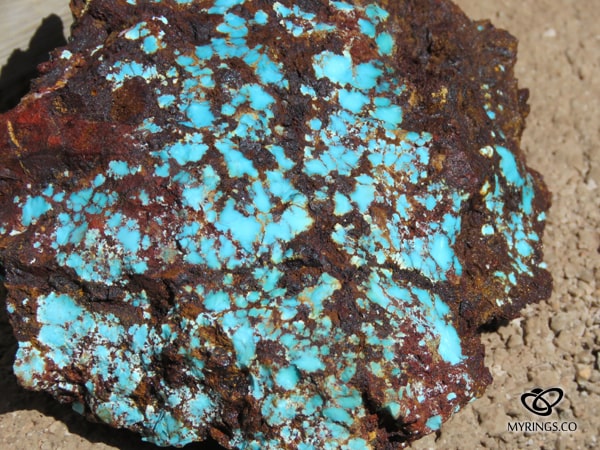 Chah Firoozeh copper deposit is located 32 km north of Babak city in Kerman province. In Chah Firoozeh mine, the intrusive mass has a combination of granodiorite and andesite, trachyandesite and dacite volcanic rocks. The presence of oxidant zone as well as phosphorous minerals has been effective for turquoise formation in Chah Firoozeh. Because of the effect of surface factors on sulfides, sulfuric acid is produced and because of its contact with phosphorous minerals such as apatite, turquoise is formed.
The source of aluminum for turquoise in Chah Firoozeh mine is alunite, which is formed from other kaolinite under the influence of sulfate-rich solutions. The causes from solutions containing copper, phosphorus and iron on alumina rocks of this mine and especially alunite grains is considered as the most important factor in turquoise formation.
Turquoise is a secondary mineral in Chah Firoozeh area and is widely associated with chrysocolla, hemorphite and malachite. Turquoise is also formed in this mine in the form of gaps filling and veins as the last phase of mineralization in the supergen and oxidant zones. The thickness of the mentioned zones in the Chah Firoozeh area is small, so we have the formation of turquoise on the surface and expecting its formation at great depths is far from expected.

Turquoise Baghu deposit is located near Baghu village (old Zar mountain), 90 km south of Damghan in the west of Trud (Semnan province) and is in the middle of the Eocene volcanic-intrusive belt of Trud – Chah Shirin.
Microscopic studies on thin and polished sections, confirmed the presence of two phases of hypogene mineralization and supergene. Chalcopyrite, galena and gold are formed during the hypogene phase, iron hydroxides (hematite, limonite and goethite), angelsite, coprite, malachite and azurite in the oxidant zone and colite and chalcocite in the secondary enrichment zone. Turquoise is the last phase of mineralization in the region because the scattered veins and grains of turquoise have cut off all the previous mineralization or have included it as a shortcut. Histological studies on turquoise ore proved the presence of concretion and colloidal microspheres in it, which are indicative of secondary weathering environments.

Abdullah Giv Turquoise Mine is located 65 km northeast of Neishabour and south of Quchan (located on the Sabzevar-Quchan route(. Abdullah Gio Turquoise Index includes three areas of Aghayeh, Alas and Ghezel Aghil, which are similar in terms of geological unit and type of mineralization. The volcanic rocks of Abdullah Giv area with Eocene age include basaltic andesite, trashy-basalt, olivine basalt and dacite andesite.
Abdullah Giv Turquoise is found inside the Eocene volcanic rocks in the form of thin veins of malachite, chrysocolla and turquoise in green. In fact, the host rock of Abdullah Giv turquoise, like the turquoise of Neishabour, includes a collection of volcanic and detrital rocks such as trachyte, trachyandesite, tuff and ignimbrite. Tectonic structures are one of the factors controlling the turquoise mineralization of this region.

Aliabad’s turquoise is formed from the phosphitylation of alunite (aluminum-rich compounds) or the independent interaction of structures with the occurrence of vein and granulation. In the alteration complex due to mountain of Shir Kooh batholith, various mineralization such as turquoise, barite, copper and kaolin are observed. Leucogranite rocks west of Shir Kooh have calc-alkaline nature and this magmatism has been the main cause of hydrothermal mineralization of Cu, Ba, Au turquoise.

Other turquoise mines in Iran 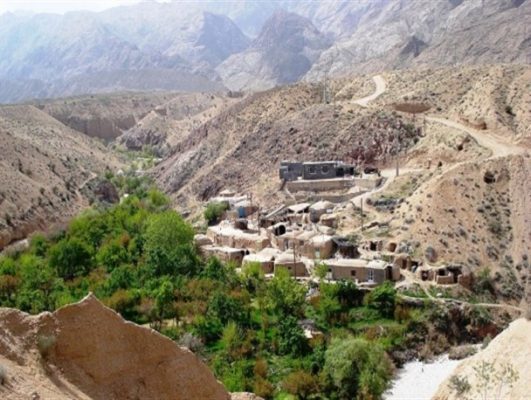 Turquoise reserves have also been reported in the Ningan area (of Boshrouyeh) in the Tabas region, 127 km southwest of Kashmir. Other well-known examples of turquoise in Iran include the rugged mountains of Sarhangi Mountain in southwestern Kashmir. There is a small reservoir of turquoise in the north of the Ashgabat region (Tabas).

Turquoise deposits and mines have also been reported in the south of Mashhad, northeast of Kerman and in Vaziri Castle near Basiran (near Zari Castle in Birjand). 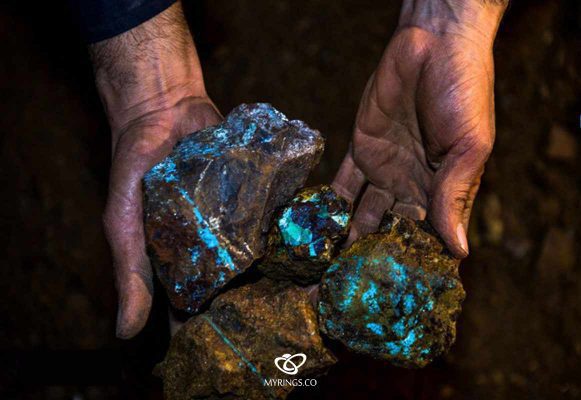 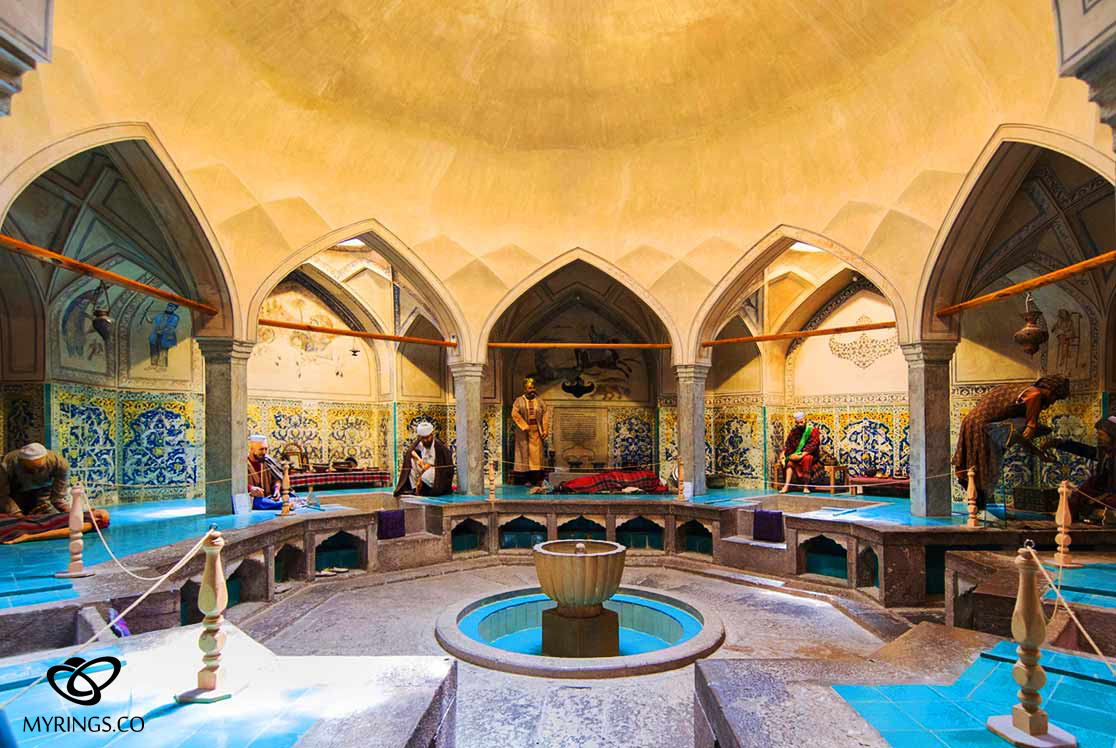