What is the exact time and day of Sharaf al-Shams in 2022?

There are several astronomical calendars that can be used to find out what day is Sharaf al-Shams and when is the best time of Sharaf al-Shams for the year 2022. One of the most authoritative ones has been calculated by the great scientist Dr. Mostafa Golpayegani, Astronomist and colleague of Professor Mansour Nojomi son of latest Monajjim Bashi Shirazi. Which this astronomical calendar shows:

Myrings online store carries out these engravings only on the basis of being engraved on valid astronomical calendars and at scheduled times. Sharaf al-Shams 2022 overlaped with the blessed hours of the holy month of Ramadan and the night of Friday, which, Insha’allah, is accompanied by more blessing and happiness.

How is the Sharaf al-Shams day for 2022 determined using the astronomical calendar? 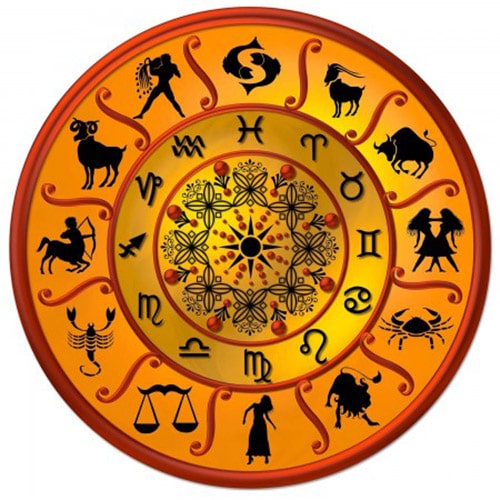 Additional information about this astronomical calendar:

Do you know what is astronomers’ opinions about the method of determining the day of Sharaf Shams? According to astronomy, the seven planets (according to this science, the sun is also one of the planets) each reach their maximum power in a position in the zodiac, which is also called the position of honor of that planet. The peak of power for the Sun takes place among the seven planets in Taurus. According to Islamic astronomy, the peak of the sun’s power in the sign of Aries occurs at 19 degrees, which in the past was equivalent to 19 Farvardin, and this is the exact time of Sharaf al-Shams and the so-called time of engraving the prayer of Sharaf Shams (ie. The honor time of the planet sun). This day is the exact time of Sharaf al-Shams to store solar energy in an object. This energy is good for health and getting rich and successful, and by storing it, it can be stored for all year round.

According to ancient books such as “Al-Sahab Al-Laali” written by Seyyed Abdullah Bushehri, the day of Sharaf al-Shams is part of “Unknown Sciences” and it is effective in eliminating poverty, protecting its owner from both diseases and animal, and finding health from calamities and to get a high position and honor.

Why is the 19th of Farvardin (8 April) called the Day of Sharaf al-Shams?

What is the reason for the importance of Sharaf Shams Day? Astronomers believe that the day of Sharaf al-Shams and the time of writing the prayer of Sharaf al-Shams according to astronomical calculations is a blessed and auspicious day, and there are special hours on this day when the sun is in its highest and honorable position in the galaxy compared to the rest of the year. In this case, that is, at the exact time of Sharaf al-Shams of 2022 and every other year, the properties of this prayer have the ultimate effect on the person who carries it with him and cause benefit and happiness for that person. According to the book Al-Tafhim written by Abu Rihan al-Biruni, which mentions the honor of the planets, the time of writing the honor of the sun is 19 Farvardin / April 08, is actually the day when the sun is in the position of 19 degrees of Pisces, which coincides with the 19th of Farvardin and that is time that the prayer of Sharaf Shams is engraved and it is the best time to write it.

What is Sharaf al-Shams really?

Sharaf al-Shams is a special and very beneficial Hizr and consists of 13 great names of God in the divine books (5 words from the Quran, 4 words from the Torah and 4 words from the Bible) which are engraved in code letters.  The general belief is that Sharaf Shams is a kind of stone, but in fact it is a prayer that is recommended to be engraved on yellow agate stone and has special rituals.  Of course, many issues have been raised about the customs and properties of Sharaf al-Shams, some of which are mixed with superstition.

Deeds needs to be done for Sharaf al-Shams in 2022

Did you know what are the ritual process of writing Sharaf al-Shams? Sharaf Shams of year 2022, like every year, has customs and conditions. One of the rituals and practices of Sharaf al-Shams is that the jewel is engraved on the hour and day of 19th Farvardin or 8th April, the exact time of which was mentioned above, and the engraver engraves it with the intention of the person who is to wear the jewel permanently. A jewel that has been engraved other than these conditions, i.e. the time of engraving is not clear and the originality of the jewel is not clear, is called non-original in the market.

Did you know how is the prayer of the Sharaf Shams Day is performed?

Other rituals of Sharaf Shams day include its prayer. The etiquette of performing this prayer is such that on this special day (the 19th Farvardin the Sharaf Shams day), perform Wudu and perform 2 rak’ats of prayer with intention of your wishes like the morning prayer, then the following short prayer should be recited:

Then engraving and writing the letters of the code should be done, but the engraving of the prayer of Sharaf al-Shams on the yellow agate gem should be done according to etiquette, which is not the work of everyone, and of course there is no need for writing or engraving to be done by the person who want to wear the ring himself. The A professional and experience engraver is the best option to right the Hirz for you by having the intention of writing the Hirz on your.

Every year, according to the information provided by the our customers, Myrings website engraves this noble prayer with the intention for the customers who placed their orders by observing the customs and practices of Sharaf Shams itself with the best quility and fairest price of the original Sharaf Shams stone. 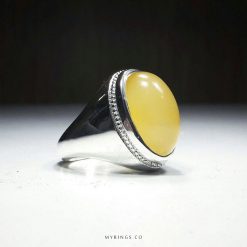 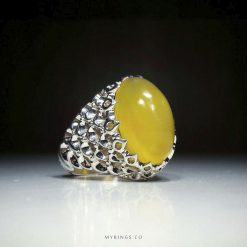 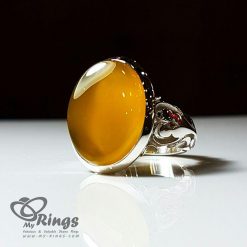 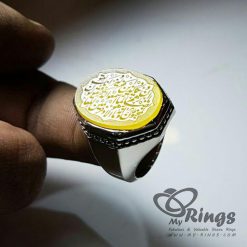 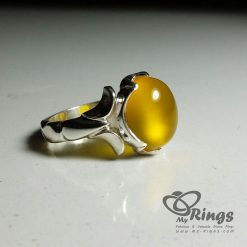 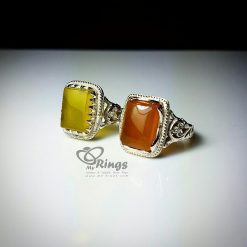 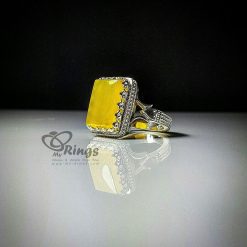 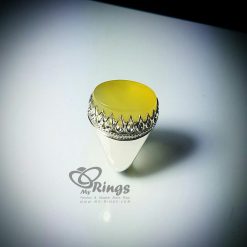 Some of the most important virtues of Sharaf Shams

Writing the prayer of Sharaf Shams on the 19th of Farvardin has many virtues for the soul and body, and many sources have recommended the use of this stone. Given that this prayer is engraved on yellow agate stone, it is important in two ways. The first is the existence of yellow agate stone, which has many properties and is very valuable, and the second is the existence of the prayer of Sharaf al-Shams, which has its own virtues. In the following, some important cases about the virtues of agate and Sharaf al-Shams on the 19th of Farvardin are discussed.

“It is an Hirz to protect all the heavenly and earthly evils, and it is the great name and the most perfect ring.”

It is also continued that:

“Agate is a refuge that every one of the Shiites of the family of Muhammad (PBUT) wears a ring of it, he sees nothing but good and blessing in its journey without need of people and will be protected from all disasters. And this ring will it protects him from the tyrant king and everything that he is afraid of. “

These letters (the prayer of Sharaf Shams) are the shape of the great name,

then in the margin of the mentioned book it says: